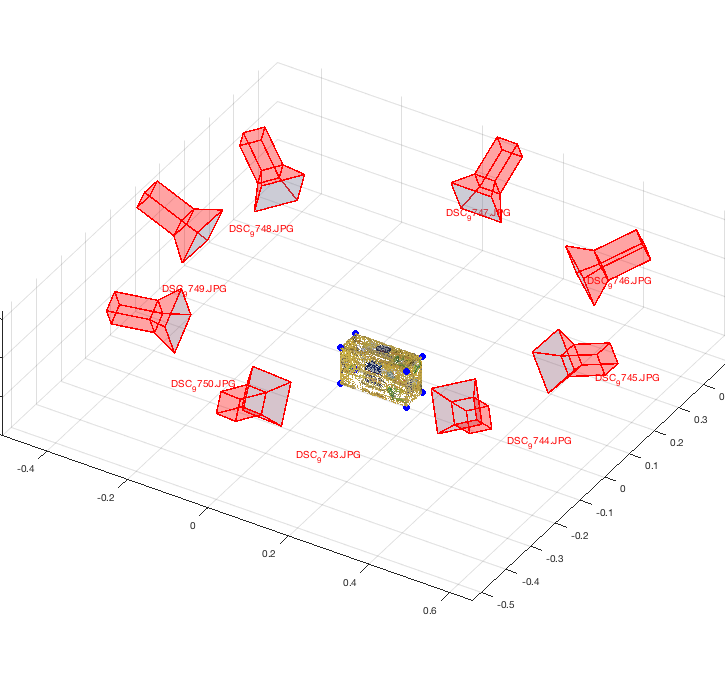 Given a 3D Model for a box, we want to re-construct the model from multiple images that captures the model from different angles. First, we build a list of 2D-3D correspondances per image. After that, we estimate the camera pose per image. Then, we project the 2D point onto the 3D model from each image (using the estimated camera pose) to re-construct the 3D model. Eventually, we shall use the constructed models to detect the object in variant poses and occlusions in different images using SIFT-based feature matching.

Note that this is a graduate class project conducted in the ‘‘Tracking and Detection in Computer Vision’’ class in the Technical University of Munich (TUM) taught by Dr. Slobodan Ilic.

During this tutorial, I would assume a basic knowledge of Camera Intrinsics, Exterinsics, World Camera Pose, Point-n-Perspective (PnP) Pose Estimation and Randomly Sampled Consensus (RANSAC). In this section, I will briefly touch on each one of these methods to get you through this tutorial.

For any given point (in the real world), we need to reflect that point in the camera’s perspective, as a point  , where:

The above expression could be written in Homogenous coordinates as follows:

where is a rotation and translation matrix. That above operation is now a linear transformation rather than an affine (geometrical) one.

In order to project the 3D $\mathbf M_\text{cam}$ coordinates onto the image plane, we obtain where

We could rewrite that as:

In order to move from a plane projection to an image coordinate system ( and ), we need to know the ratio of pixels per square unit of measurements along each axis ().

Let be the pixels per square unit of measurements along the X- and Y-axis, and be the projection of the camera center in the image coordinate system.

We could squeeze all translation (), rotation () and calibration () into a projection matrix ().

The wikipedia explanation of the PnP algorithm is fairly simple to follow. You can also refer to Prof. Prof Steven LaValle lecture on the same topic for a better understanding.

RANSAC is an outlier-extraction method that could be used with various regression methods. It defines the quality of regression based on the number of inliers. Inliers/Outliers are defined by comparing distances against a pre-defined threshold. More details are explained in RANSAC Wikipedia article.

We used Matlab to manually create the 2D-3D Correspondences between at least 6 points in the image and the box. Those points were usually the corners of the box. After that, we evaluated the camera pose on each image using the following Matlab code:

I used the vl_feat [1] implementation on Matlab to extract the SIFT features as follows:

In order to project the 2D points onto the 3D model, we need the following steps:

We could do that by checking if the angle between the norm of the plane and the intersection ray is less than 90 degrees as follows:

Sub-Step 2.3: Intersection Point Should Lie on that Triangle/Face

Given that the point lies in the same plane as the triangle, a simple check that the area of the triangle is equal to the sum of all sub-triangles created by the new point on the triangle should do the trick. Formally, assume that a triangles has three points , and , and the intersection point is . The following equality should hold:

Step 3: Put it all together!

Now, we have all components to loop through all of the images (here, those are 8 images) and reconstruct the model.

Now, we plot the camera world locations and the box with the SIFT-features on it. However, we don’t plot the sift features themselves, we plot RGB values instead.