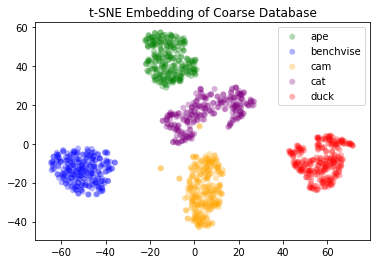 Object Recongition and 3D Pose Estimation are heavily researched topics in Computer Vision. They are often needed in emerging Robotics and Augmented Reality applications. Most common pose estimation methods use single classifier per object, and thus, resulting in a linear growth of complexity with every new object in the environment. In this project, I use a custom hinge-based loss to learn descriptor that separate objects based on their class and 3D pose. Learned feature space will be used in combination with k-nearest neighbour to detect object class and estimate its pose.

Note that this is a graduate class project conducted in the ‘‘Tracking and Detection in Computer Vision’’ class in the Technical University of Munich (TUM) taught by Dr. Slobodan Ilic. You could have a look at the Github repository.

Loss functions are key components in neural networks research. They guide the networks to approach a local minima that achieves a certain objective (i.e. classification or regression). In this project, I implement a custom hinge loss [1] that trains on triplets of anchors, pullers and pushers. The custom loss teaches the network to pull the "Pullers" close to the "Anchors" and to push the "Pushers" away from the "Anchors".

Instead of verbosely describing the network architecture, you could find implemented below:

The dataset consists of real and synthetic data. Synthetic data are generated from predefined viewpoints. We use both synthetic and real data for training, and only training data for testing. You could refer to [1] for a more detailed description. In the following figure, you find the a sample batch of anchors, pullers and pushers.

In this step, we evalualte the both the triplets and pairs loss and sum them up. Afterwards, we backpropagate the changes to the network. Our forward passes contain all anchors, pullers and pushers. We need to index in a way that allow us to separate the anchors from the pullers and pushers in order to be able to evaluate the loss terms. This is designed in the following manner:

Our loss optimizes the above two criteria simultaneously. It yields in a feature space that is semantically divided such as objects of the same class are clustered together. Objects within a class cluster are re-organized such that similar poses are closer together. This formulation allows for both object detection and 3D pose estimation using a nearest neighbour approach. An object is compared against an existing database of classes and poses. Database feature vectors are pre-computed. For each new object, a feature vector is computed using a forward pass. Afterwards, we search for the closest feature vector to the generated one in the database and predict its label and pose.